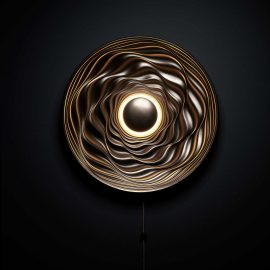 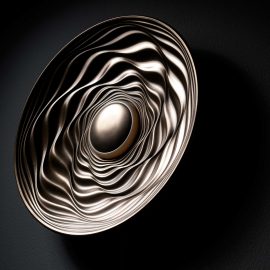 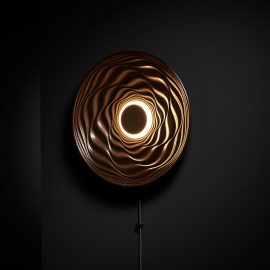 Transmission is an illuminated wall mounted sculpture which creates different effects depending on the use of its integral lighting, external illumination or both.

By day, the piece has a distinctive character where surface reflections play a dominant role and mesmerising visual distortions alter the sense of depth. By night, the piece takes on a new identity when illuminated; it is transformed into an interplay of shadows and light.

The piece was inspired by the Op Art movement and in particular the curve paintings of Bridget Riley. I wondered what would happen to the waves in her early work when they left the canvas and how I could play with the 2D visual illusion by introducing a third dimension.

The name, ‘ Transmission’,  comes from the movement of wave energy, flowing out from the centre and then dissipating as it progresses to the edge. It also refers to how gentle ambient lighting is created from its central ring, travelling outwards over the peaks and troughs and beyond. It is made in cold cast bronze (a mix of resin and bronze) or cold cast aluminium.

The piece is suspended from a stainless steel back plate and can either be hard wired directly into the mains or plugged in with the decorative cable and knurled metal cable holders on show.

Transmission is made to order. If you are interested in being one of the first to own this groundbreaking piece of art, please email me  with “Transmission” as the subject.