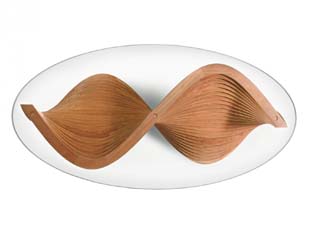 The journey of Sidewinder II

“We so enjoyed the process from beginning to end. It was a journey that encompassed and introduced us to your world. A world of creativity, passion and perfection. Such a privilege to be able to enjoy your stunning creations in our home.”
Joanne and Russel

Initial meeting
Joanne and Russel first saw my work at an exhibtion in 2014. It wasn’t until a couple of years later that they contacted me to enquire about a commission. The piece they were so taken by was one of my Strata range, Sidewinder and Joanne told me that she had fallen in love with it. I paid them a visit two weeks later to to see the space in which they were planning to have the table and discuss their ideas further.

Their living room colour palette included a lot of creams and dark browns, so in order to make the coffee table stand out as the centrepiece to the room, American Cherry wood was chosen to add more warmth and distinguish the piece from the cooler, darker colours of the room.

Development and evolution of the design

The couple wanted a slightly bigger reworking of the original Sidewinder table and during the remodelling process the idea of adding something new to the design came about. Consequently the new version features a new streamlined profile and more twist in the end sections that emphasises the complex, eye-catching layers further. I sent them a video giving them a 3D tour of the piece so that they could appreciate the evolution of the concept from the original idea. Creating new ideas as well as developing existing designs is always a really exciting part of the process for me. Click on the image to see the video itself

Joanne and Russel commissioned two other tables (to be featured in a later blog) and once the production phase began, it took around three months to complete. Finding clean boards with a constant colour from one board to the next was a priority and I travelled over to Sheffield to select the Cherry. Each section of the coffee table was made up of five pieces that were all jointed and glued to the next. Then this sub-assembly was flattened and sanded before being glued to the next sub-assembly. Bit by bit, the three dimensional form evolved as the layers were built up. As with all of my commissions, I like to keep my clients informed of the production progress and regularly updated Joanne and Russel with photos and videos. Click the image to watch the oiling phase on video

Delivery
Finally the day came for me to take Sidewinder II (and the two other tables) to their new home. They were delighted with their new centrepiece (and the other two side tables of course) and they thoroughly enjoyed the process. After having had the three tables on the go at once, the workshop seemed quite bare the next day. I had some studio shots taken in Manchester before delivery as well as some in their living room, so even though my babies had flown the nest, with great photos it wasn’t hard to say goodbye.